A 56-year-old male presents to your emergency department complaining of substernal chest pain, mild dyspnea and fatigue. He has a history of hyperlipidemia and hypertension. You obtain an electrocardiogram, but are not sure whether it represents acute MI as it does not meet traditional STEMI criteria.

The classical STEMI criteria were developed to ensure that obvious myocardial infarction is not missed in the acute setting.[1] However, emergency providers must be familiar with many other ECG manifestations of acute coronary artery occlusion. “STEMI” is only one of many potential presentations of Occlusion Myocardial Infarction (OMI), as described by Drs. Pendell Meyers, Scott Weingart and Stephen Smith.[2] This article will cover a number of commonly missed ECG findings indicative of OMI and require urgent cardiac catheterization.

There are a few principles that apply to diagnosis of OMI in every case. The first is that serial ECGs should be performed in all cases where acute coronary syndrome is suspected. This can prevent missing an obvious OMI as ECG findings can evolve over a very short (often 5-15 minutes) period of time.

Changes in ST segment or T-wave morphology over a short period of time are strongly suggestive of an unstable coronary lesion requiring intervention.[3] Absence of changes does not mean the patient no longer requires emergent catheterization. The effects of nitroglycerin on ECG findings are unclear, but obtaining an ECG prior to administration allows providers to trend potential changes. It is also important to evaluate any prehospital ECGs that have been recorded. It is possible that changes have resolved prior to the emergency department ECG due to prehospital treatment or spontaneous improvement. Computer ECG interpretation will frequently miss subtle or atypical findings, and may interpret the ECG as normal. The interpreting clinician must ensure details are not overlooked.

Inferior myocardial infarction frequently presents with few early ECG findings so it is important to be able to recognize subtle signs. Inferior OMI presents with ST-elevation in a combination of leads II, III and aVF. However, the earliest finding is often T-wave inversion or ST-depression in lead aVL.[4,5]  This is a reciprocal change, but can present prior to ST-elevation. Additionally, in the inferior leads, the first changes may be an increase in T-wave width and height. 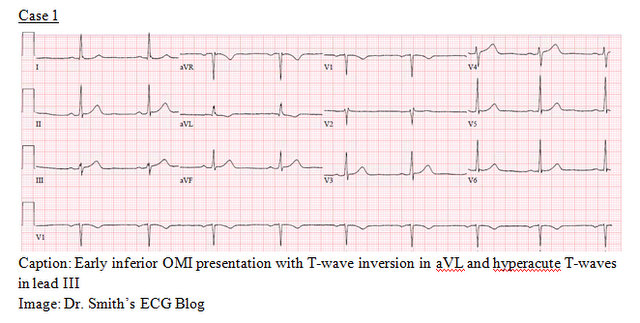 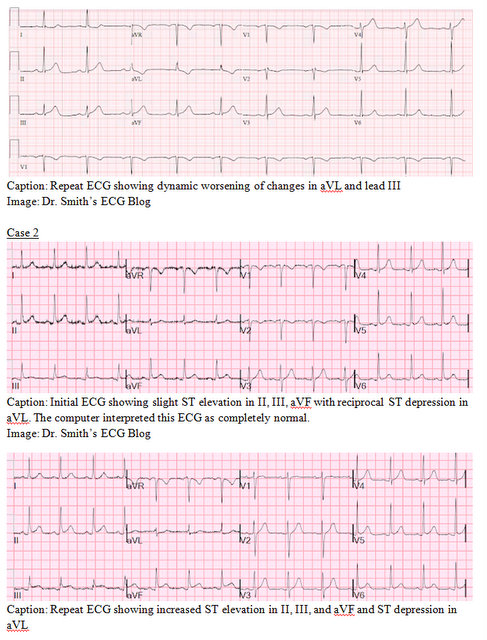 A lesser known presentation of acute occlusion or near-occlusion of the left anterior descending (LAD) is de Winter’s T-waves, first published by de Winter in 2008.[6] The condition is characterized by ST depression and hyperacute T-waves in the distribution of ischemia. These are not reciprocal findings, or indicative of posterior infarction. Importantly, these patients may have had resolution of symptoms, since de Winter’s T-waves can indicate near or intermittent occlusion. 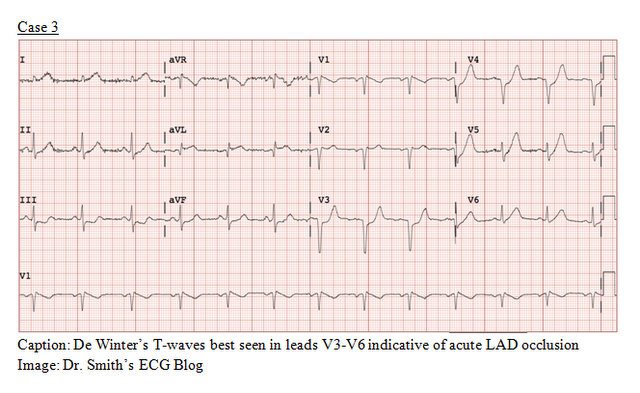 It is classically believed that the ECG cannot be used to diagnose acute OMI in the setting of left bundle branch block (LBBB) or in patients with a right ventricular pacemaker, which generates a LBBB pattern. It has historically been taught that patients with new- or presumed-new LBBB, should be treated as if they are having a STEMI if they present with ACS symptoms. Both of these ideas are flawed as the modified Sgarbossa criteria can be used in both scenarios to diagnose transmural ischemia.[7–9]

*any amount of concordant change is likely abnormal may indicate OMI 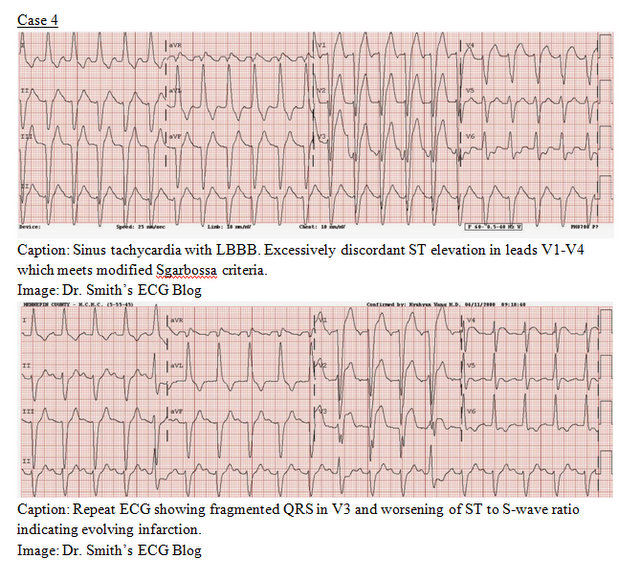 Performing a posterior ECG with leads V7-V9 is less sensitive and specific than the findings seen in V1-V4, but posterior leads may be useful in some cases.[10]  Posterior infarct is associated with lack of flow through the posterior descending artery (PDA) which may be supplied by either the right coronary artery (RCA) or left circumflex artery (LCx). It is common to see posterior infarct in association with inferior or lateral OMI, but can also be seen in isolation due to occlusion of the PDA or distal occlusion of the RCA or LCx. Contrary to widespread belief, the T-wave may be inverted or upright, dependent on the balance between anterior vs. posterior wall T-wave forces, the duration of occlusion and the state of any spontaneous reperfusion. In addition, ST depression of posterior MI generally has maximal ST depression in V2-V4, whereas the ST depression of subendocardial ischemia is more often in V4-V6.  On occasion, ST depression maximal in V2-V4 is due to subendocardial ischemia. Differentiating between anterior OMI and benign early repolarization is challenging. ST elevation is a normal finding in some patients. One key to diagnosis in these patients is serial ECGs, which can show dynamic changes indicating OMI. Additionally, comparing to a patient’s prior ECG, when available, can aid in diagnosis.

A calculator was developed by Dr. Smith to distinguish between LAD occlusion and benign early repolarization.12 This is available on MDCalc, Dr. Smith’s ECG Blog, or as a standalone app on Apple iOS titled “SubtleSTEMI” and on Android titled “ECG SMITH.” It requires four measurements:

A result greater than 18.2 has been validated as supporting LAD occlusion over early repolarization. 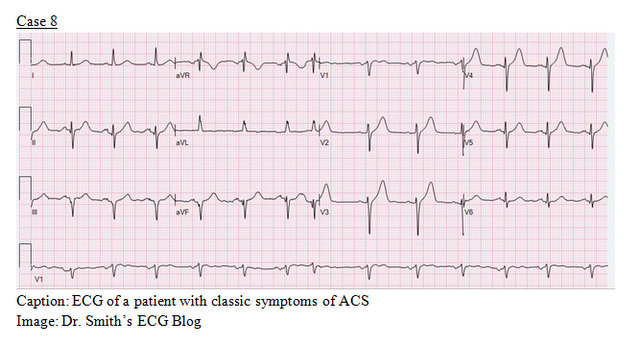 Pericarditis is one of the most common mimics of OMI. Traditionally, it is taught that diffuse ST elevation suggests pericarditis over OMI. However, you diagnose pericarditis at your (and the patient’s) peril.  Pericarditis is relatively rare, with approximately 1/20th the incidence of OMI, so the pretest probability is very low.[13,14]  There are multiple ways OMI can present with diffuse ST elevation. It is the clinician’s job to definitively rule out OMI, or other life-threatening conditions, before diagnosing pericarditis.

Anterior and inferior ST elevation together can suggest proximal occlusion of a Type III “wraparound LAD,” which supplies a portion of the inferior wall and may even have anastomosis with the PDA. There will often be lateral ST elevation in patients with proximal LAD occlusion as well. Any ST depression, especially any reciprocal ST depression in aVL, makes the diagnosis of pericarditis unlikely.[15]

Serial ECGs and bedside echocardiogram are valuable in confirming or ruling out OMI in these patients. Dynamic ST changes or wall motion abnormality on echocardiogram confirms coronary occlusion and indicates emergent cardiac catheterization. Patients presenting with symptoms of ACS must be assumed to have acute coronary artery occlusion until proven otherwise. Assessment can be augmented by performing serial ECGs and bedside echocardiography. The ECG is one of many tools used to diagnose OMI and the astute clinician must be able to recognize ECG signs of OMI that are outside of traditional STEMI guidelines.

Andrew is a critical care paramedic and sceond-year medical student at Rocky Vista University in Colorado. He has interests in cardiology, ECG interpretation, critical care, airway management, and point-of-care ultrasound. He can be reached @amerelman

Dr. Smith is an attending emergency physician at Hennepin County Medical Center in Minnesota. He has interest and expertise in emergent cardiac care and ECG interpretation. He runs “Dr. Smith’s ECG Blog” which houses hundreds of ECG cases covering a wide variety of topics. Tweet him @smithECGBlog